Deoleo entrusts Sensolive_Oil to define
the industry’s commitment to quality

The world’s leading olive oil company is taking part in the implementation of pilot programs that could validate new technologies to augment and perhaps enhance the traditional panel testing of oils.

Deoleo has demonstrated its commitment to the SENSEOLIVE_OIL work team, an operational group that follows up on years of effort to transfer to the sector the implementation of new technologies that complement the government’s established panel testing when it comes to commercially classifying virgin olive oils.

The organisation has launched a project under its own name that offers companies in the industry, such as Deoleo, the opportunity to test the effectiveness of new evaluation models that are being developed, as well as to verify in real time the different categories of virgin olive oils.

In the words of Ignacio Silva, CEO of Deoleo: “We want to help drive a change towards quality, which is the key to promoting sustainable growth in the olive oil category. Improving the current classification systems and reducing the subjective component and interpretations can promote a very positive impact in this regard. Undoubtedly, this step requires the coordination of all actors in the sector. We are on the right track.”

Validation of the model as a self-control method

The Olive Oil Interprofessional Organisation of Spain (known in that country as “the Interprofesional”), the CeiA3 campus of international agri-food excellence, the University of Granada and three companies in the sector – Deoleo, Dcoop and Sovena – are participating in the implementation of pilot programs that could validate a new approach as a self-control method.

Pilot testing will be carried out among the three participating companies for this anticipated validation. The technologies will be implemented in officially designated laboratories.

Deoleo, Dcoop and Sovena have begun sending samples for scientific examination, which are first subjected to instrumental analysis and subsequent classification according to the signals generated. Samples that obtain different scores from the tastings and from the instrumental analysis are then sent to the collaborating laboratories of the Spanish Ministry of Agriculture, Fisheries and Food and the Andalusian Ministry of Agriculture, Livestock, Fisheries and Sustainable Development. Further scientific support is also provided by the University of Cordoba, which collaborates to provide technical assistance.

All of this will provide information for adjusting procedures, standardisation tools and mathematical models. It is expected to validate the suitability of these models. Lourdes Arce, Professor of Analytical Chemistry at the University of Cordoba, is confident that a “sufficiently mature” analytical system is already in place to accomplish this.

“Thanks to the support of the Interprofessional and companies in the sector,” Arce said, “we have more than 3,000 oil samples analysed and many studies carried out by the University of Cordoba and other research groups, and I think we have enough scientific authority to say that this works.” He points out, however, that, to ensure that the equipment works perfectly, “it must be calibrated with samples treated by expert panels, at least by two panels – that is the key”.

In this endeavour, SENSOLIVE_OIL has found its ideal partner: the Andalusian Tasting Panel Reference and Harmonisation System Operational Group (Interpanel), with whom it has embarked on an online collaboration to coordinate knowledge among stakeholders in the olive oil sector and help establish standards and procedures for the various panels to reach harmonious conclusions.

Its members include the Foundation for the Promotion and Development of Olive and Olive Oil, Agro-food Cooperatives of Andalusia, the Regulatory Council of the Sierra de Segura Designation of Origin, the Institute for Agricultural and Fisheries Research and Training and the University of Granada. This group is commissioned to provide the samples that allow the equipment to be calibrated.

In the more than three decades since the European Union issued Regulation 2568/91 establishing sensory analysis “panel tests” for the commercial classification of virgin olive oils, multiple panels of eight to 12 experts have determined the categories in which these oils should be marketed, based on their organoleptic characteristics. Virgin olive oils are the only food products traded in Europe that must undergo this mandatory organoleptic tasting.

However, although the regulation has undoubtedly contributed to improving overall quality, the approach has certain shortcomings in terms of quality control, since different juries have sometimes reached different conclusions when classifying the same samples.

For this reason, the olive oil sector commissioned the Interprofesional to get involved. “In 2013 we launched a line of research into instrumental technologies capable of performing this analysis reliably, quickly and in a reproducible and economical way,” explains the organisation’s manager, Teresa Pérez.

Over the past two decades, ten research groups have participated in the project, coordinated by the CeiA3 of the University of Cordoba. It has been determined that two analytical technologies offer instrumental signals that, by means of mathematical models and statistical treatments, accurately indicate whether a virgin olive oil is lampante, virgin or extra virgin. So, the fundamental objective has been achieved to differentiate one type of oil from another in a simple, cheap and dependable way. 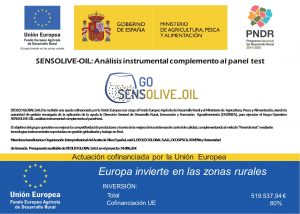 Ignacio Silva: ¨The consumer is the most important part of the chain¨